It is important for all of us to give to the homeless and needy says Non-governmental Gender Organisations’ Coordinating Council Board Chairperson Mary Mulenga.

Speaking during the handover ceremony of a donation to the flood victims in Luapula and Northern Provinces at the Non-governmental Gender Organisations’ Coordinating Council (NGOCC) Secretariat in Lusaka, Ms. Mulenga thanked Power Divine Missions (PDM) and WaterAid Zambia for partnering with the organisation.

“NGOCC is making a contribution towards the flood victims in Luapula and Northern Provinces. As you may be aware, some parts of the country have been adversely affected by the heavy rains during the last rainy season which has led to flooding and consequently displacing a number of people. According to the Disaster Management and Mitigation Unit (DMMU), approximately 700, 000 people in a total of 28 districts have been affected by the floods and are in need of relief support. The affected Provinces being North-Western, Copperbelt, Northern, Luapula, Muchinga, Eastern, Western and some parts of Lusaka,” Ms. Mulenga said.

“While recognising the efforts being made by government to help the victims, it is important for all of us to lend a helping hand to our fellow citizens who have become homeless and are facing numerous challenges as a result of the floods. We are cognisant of the huge pressure on our national treasury occasioned especially by the advent of COVID-19 pandemic. It is against this background that NGOCC is making this ‘small’ contribution to the flood victims in Luapula and Northern Provinces. We say small because we know it is indeed a drop in the ocean, given the needs of the people affected.”

Ms. Mulenga said the two Provinces had been selected for the donation because NGOCC was implementing a project on Ending Child Marriage in the areas.

“Specifically, about 50 households in Chief Mwenda’s area, one of the project areas, have been affected by the floods.
Therefore, if nothing is done to help for instance the victims in this area, the gains recorded so far in withdrawing young girls from marriages may be lost. As a contribution to ameliorate the suffering of these victims in Luapula and Northern Provinces, NGOCC is making the following donation; 25 boxes of sanitary towels (260 packets), bales of second hand clothes and shoes, 3 hand washing stations with liquid soap and sanitizers and 35 blankets,” Ms. Mulenga said.

“I will be failing in my duty if I do not thank some of the partners that have made this donation possible. Specifically, Power Divine Missions (PDM) for the sanitary towels, WaterAid Zambia and indeed the NGOCC network members for the second hand clothes and shoes. May the good lord bless you for thinking about the most vulnerable in our society. This in itself is an acknowledgement on your part that our society is indeed unjust and some of our people are more vulnerable and need support.” 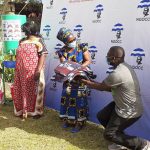